ITALIANS DO IT BITTER mix Vol. 3 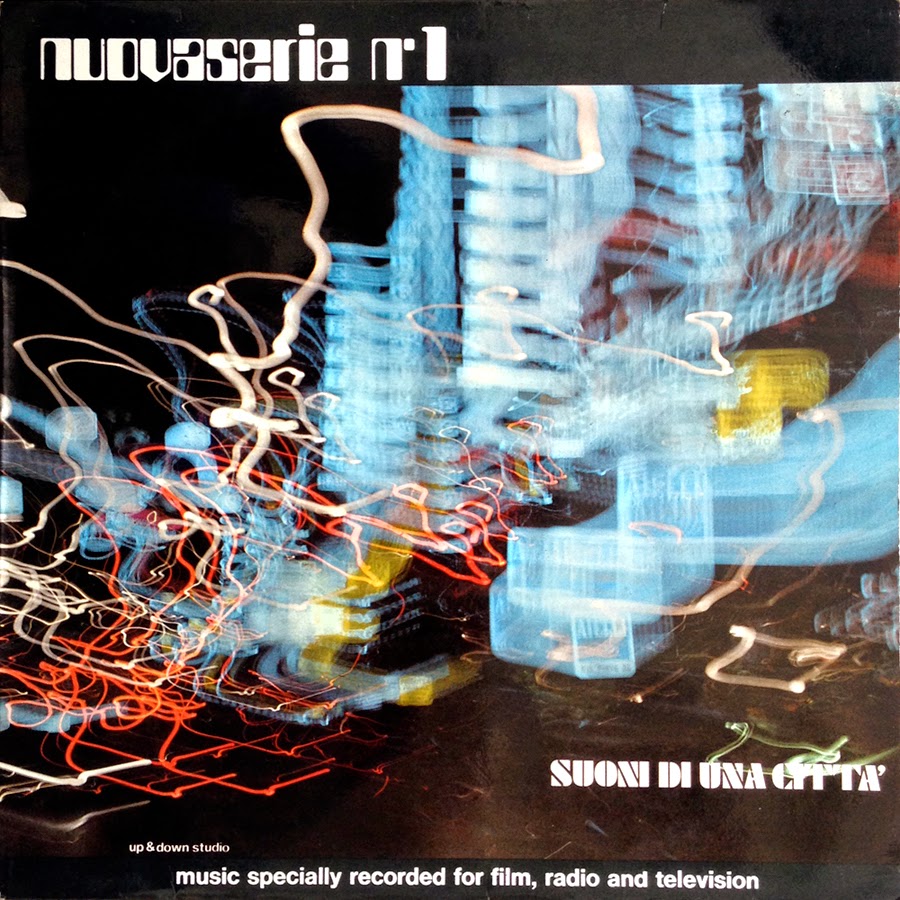 Writer, teacher and composer Maria Teresa Luciani recorded just a couple of library albums in 1972 on the elusive and rare Fama label (twin label of Pegaso, both under the Ricordi's umbrella). I've never heard (or seen) "Barocco 2000" (FM 8) but here's finally a rip of "Suoni Di Una Città", a wonderful collection of avant-garde electro-acoustic tracks not far from the coeval works of Peymont (Luigi Malatesta), Gerardo Iacoucci ("Simbolismo Psichedelico") or the other Luciani, Antonio Riccardo.
Pubblicato da Little Tony Negri alle 11/21/2014 12:33:00 AM 3 commenti: 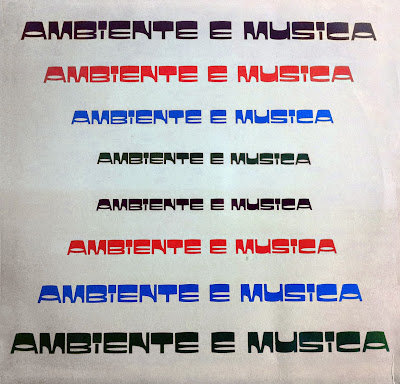 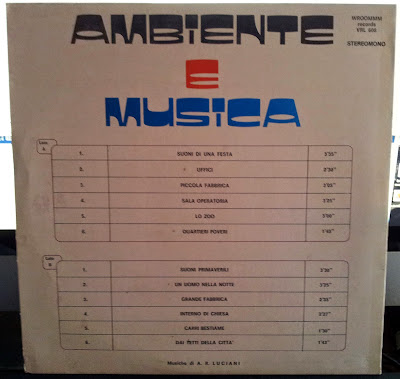 "While composers like Sorgini and Umiliani usually get all the focus when discussing obscure Italian library LPs, there’s another unsung composer that is really in need of close attention. The versatile A.R Luciani composed for various labels covering a broad range of styles. One of his many interesting LPs is Ambiente E Musica. A very cool set of pastoral Avant Garde and otherwordly electronics. A superb LP issued on the collectable Vroommm label."


Word to JP. Luciani- born in Palermo, Sicily in 1931- is one of the most consistent composers of the golden age of italian music libraries, with dozens of (good to excellent) albums made for countless labels and publishers. This is one of the rarest and musically challenging of his vast discography, a first in the blogosphere for y'all.
Pubblicato da Little Tony Negri alle 11/11/2014 11:11:00 PM 5 commenti:

Italians Do It Bitter Vol.2

ITALIANS DO IT BITTER VOLUME 1 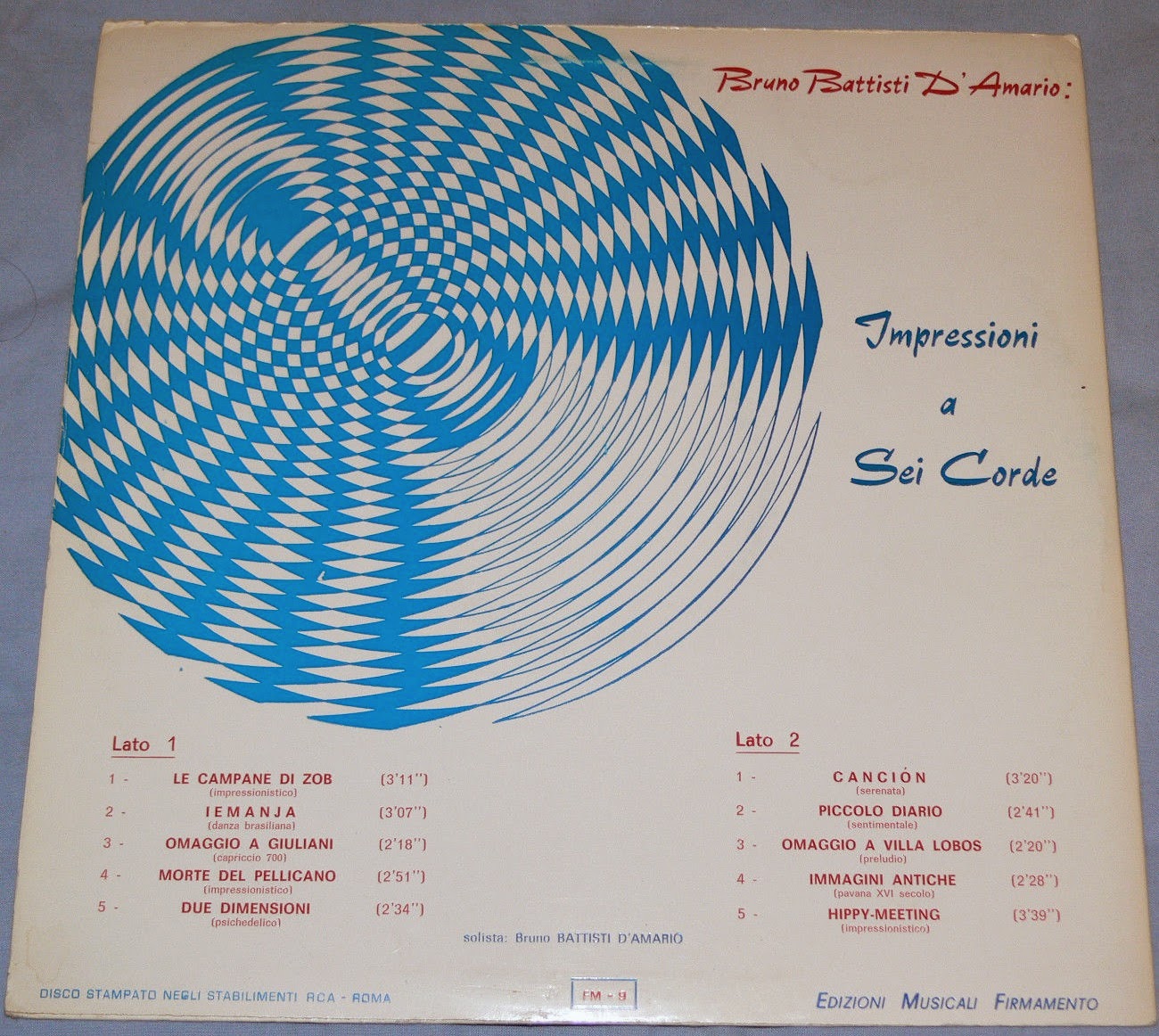 Guitarist Bruno Battisti D'Amario is an Italian legend. A master of both classical and electric guitar he's played on thousands of soundtracks, library and pop records (notably Morricone's classic scores and even G.I.N.C.'s The Feedback) and recorded a dozen of solo albums, most of them for Armando Sciascia's Phase 6/Vedette label.
This 1970 library album for Firmamento (FM-9, released also on the RTV label as RT-107) showcases his virtuoso skills in a solo setting, far from the easy, almost muzak atmosphere of his other records and closer to his classical music roots. Imagine a mediterranean Baden Powell (Villa Lobos being a common influence), add a dose of italian weirdness from the (late) psychedelic era and the result is probably Battisti D'Amario's best (and least known) album.
Pubblicato da Little Tony Negri alle 3/17/2014 08:36:00 PM 2 commenti: 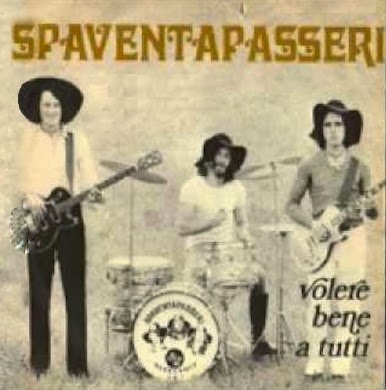 Megarare 7" from power trio Spaventapasseri (Scarecrows) on the Equipe label (founded by publisher Abramo Allione and his son Italo), a single valued mostly for the incredible B side "Bu Ga Boo", a monster psyche hard rock track that sounds like a trippier and funkier version of the Zep jamming on "Whole Lotta Love"'s coda. Open heavy drums, a hard hitting funk break, fuzzy guitars and nonsense lyrics. Is there anything better? The A side's not bad either, more on the pop tip but with that pinch of psychedelia in the verse that makes it quite enjoyable. 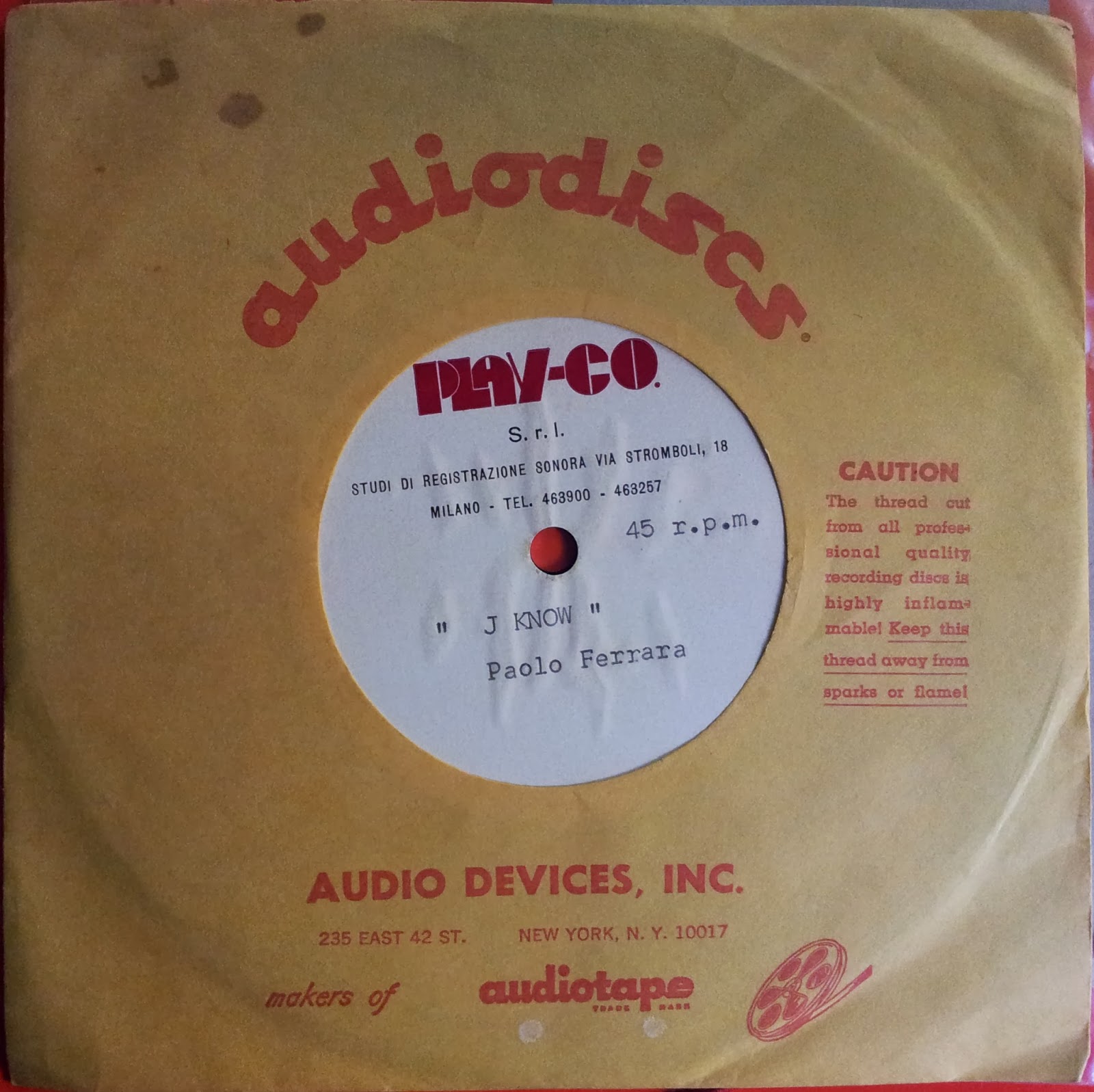 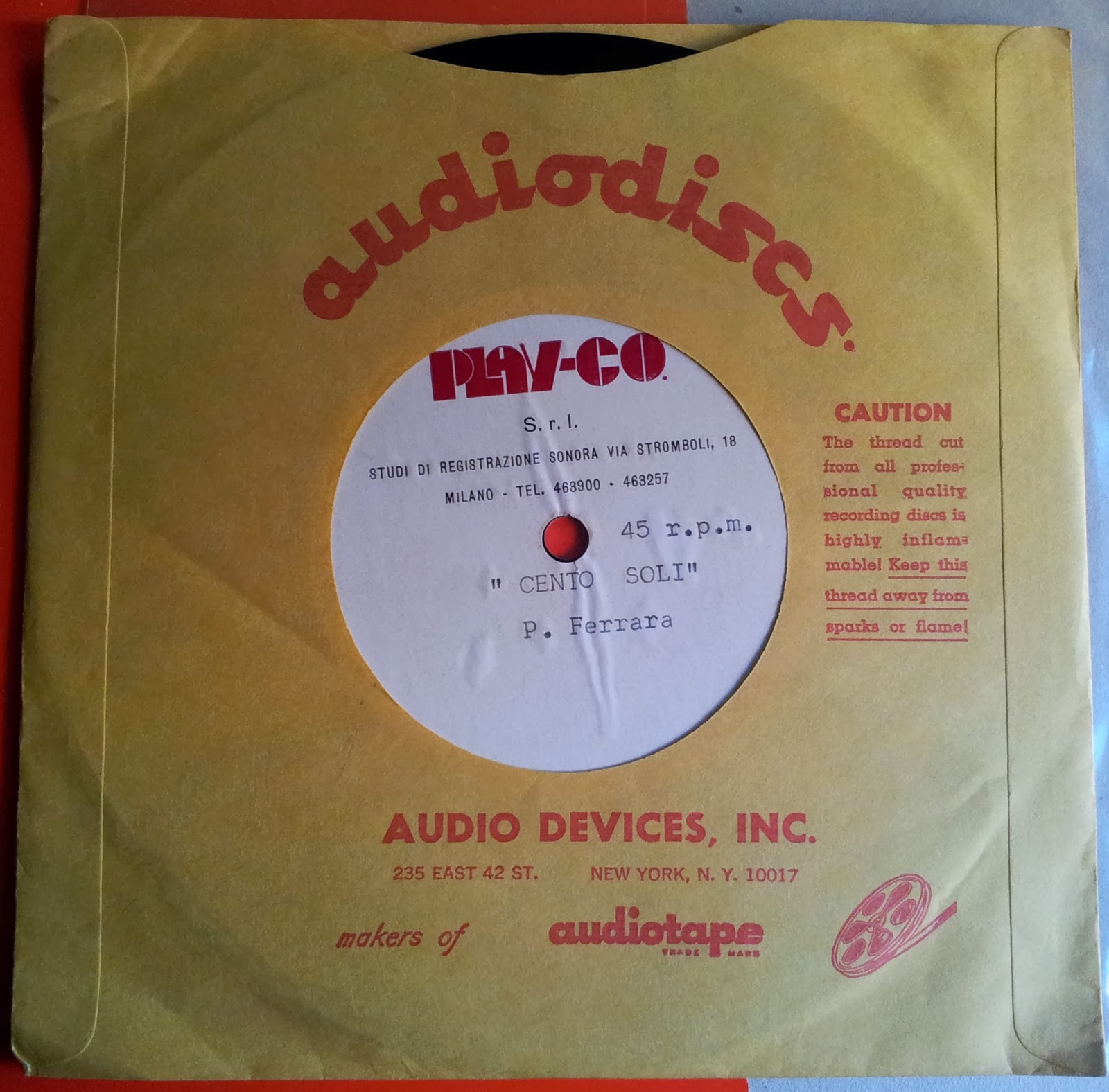 Here's a rare and mysterious 7" I found on a little bookstall in my neighborhood, a test pressing of a (unreleased?) single by composer and sometimes pop singer Paolo Ferrara.
I couldn't find any info about it, only an entry on the Peer Music database listing both tracks and Ferrara as the singer, but no year or composer. All we know is that it was recorded at Renato Carosone's studio Play-Co in Milan, sometimes between the late 60s and the early 70s.
"I Know" is a psychedelic pop song with a strong r&b feel, it sounds like late 60s Van Morrison or Eric Burdon and has a great wah-wah guitar solo. "Cento Soli" is closer to Ferrara's other singles, rooted in italian melodic pop but influenced by the anglo-american rock music of the day, which in this case means some tasty organ in a Procol Harum/early Deep Purple vein.
Pubblicato da Little Tony Negri alle 2/13/2014 12:33:00 PM 1 commento: 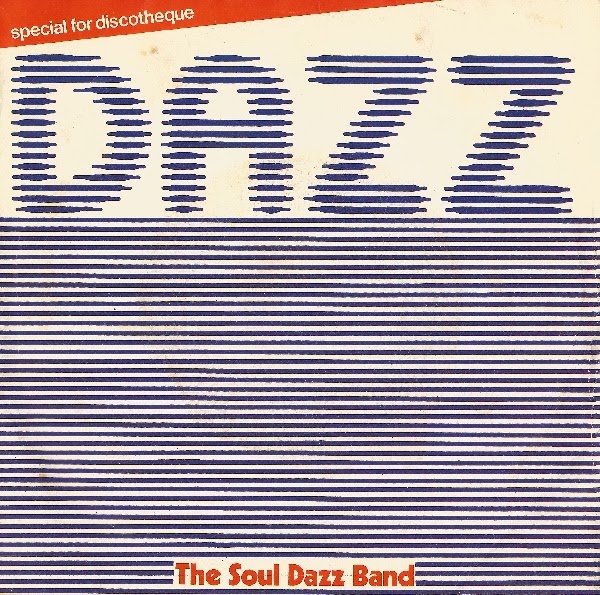 
Great Italian cover of Brick's funk-disco classic by the SAAR studio band, arranged and directed by the great Mario Battaini (aka The Duke Of Burlington) with Giovanni Moretto. On the flip a cheesy disco-tango tune composed by the two that grooves nonetheless. 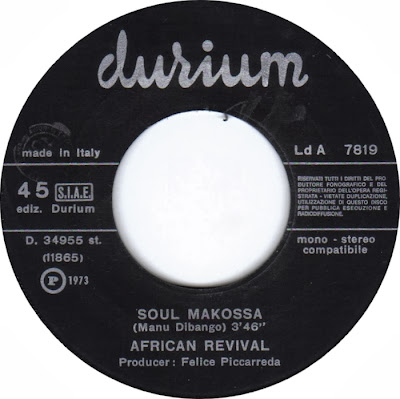 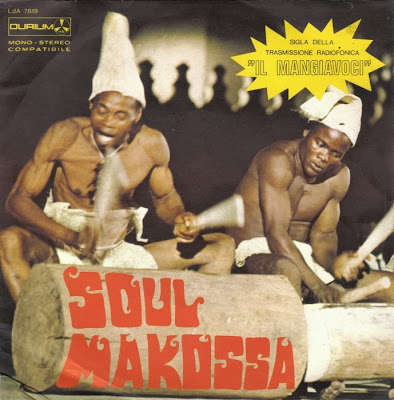 
Trying to cash in on the international success of Manu Dibango's single "Soul Makossa" and the bad distribution of the original version in Italy, Durium records' producer Felice Piccarreda (Wess, The Motowns, I Nuovi Angeli) in early 1973 assembled a studio band to cover the track. The result is one of the best versions of this afro-funk classic, faster than the original and hard on the drums, backed with an "original" called "Pitch Black" that keeps the groove going with a similar bass riff and more fake African gibberish. 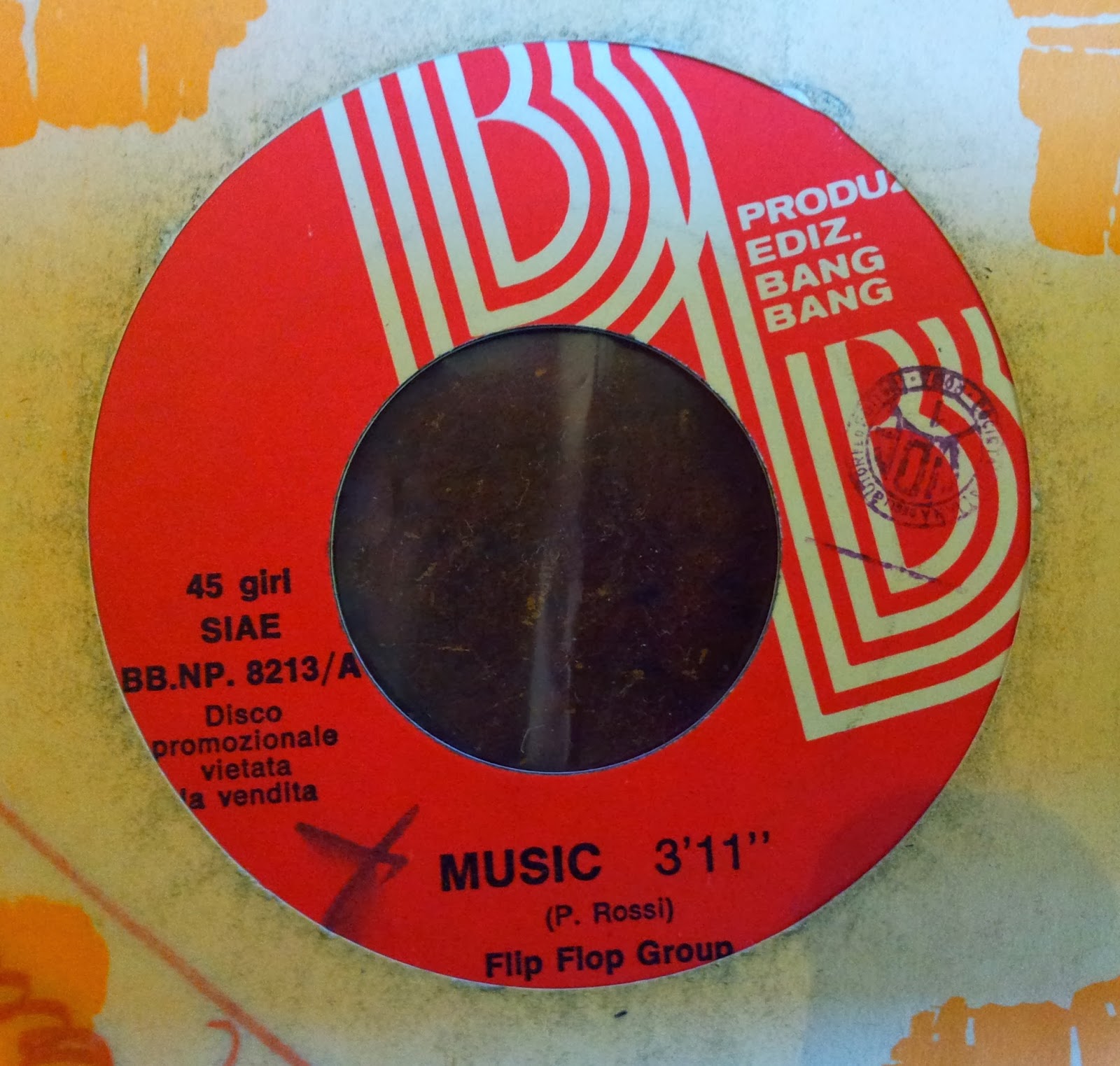 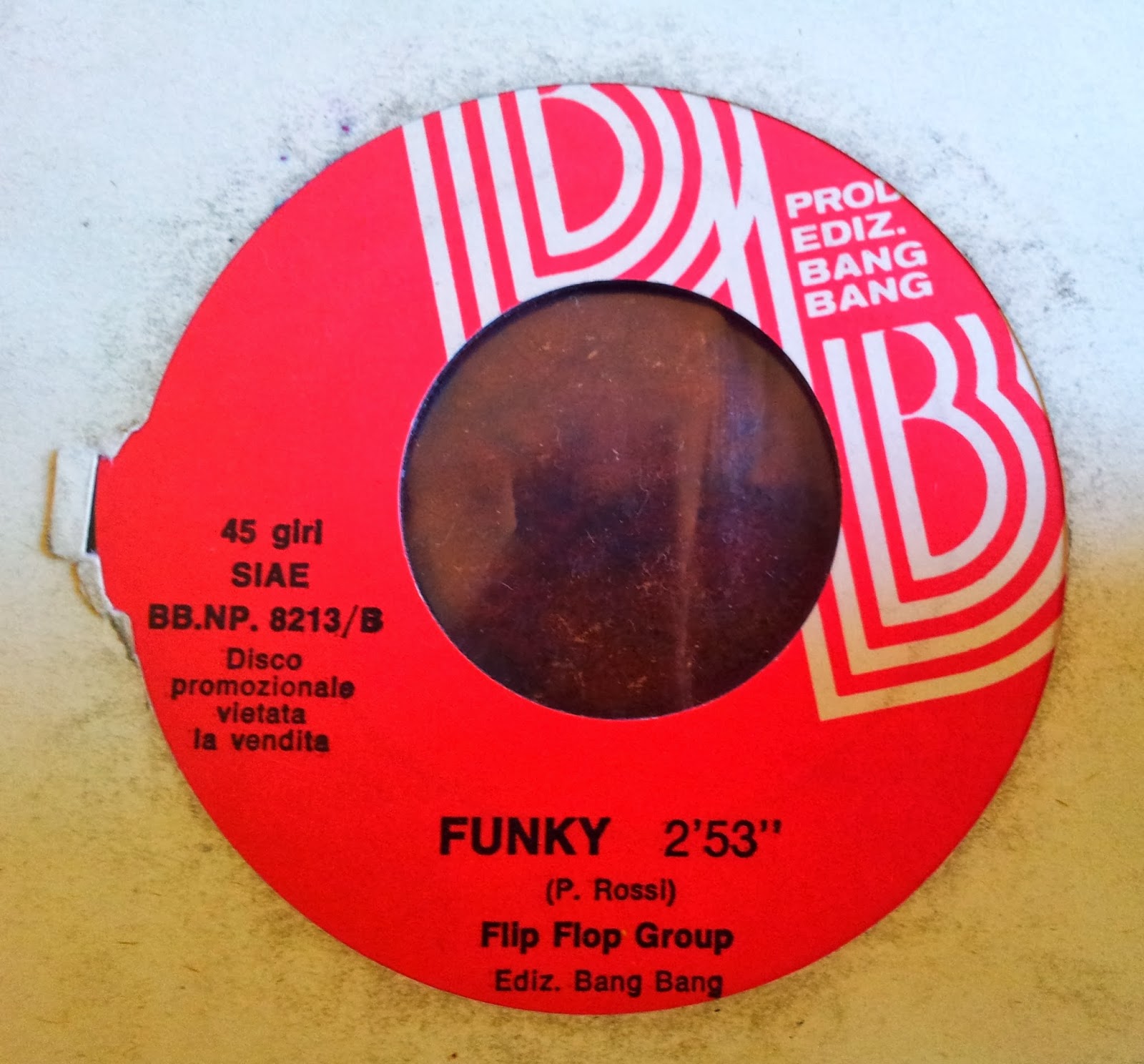 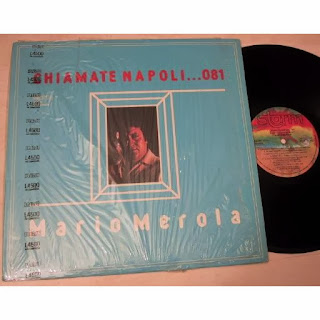 Composer and arranger Eduardo Alfieri is mostly known for his work in the "Canzone Napoletana" field, but in the late 70s and early 80s scored a bunch of camorra-exploitation movies starring king Mario Merola at his best. The movies were a cross between Italian Poliziottesco movies and the Neapolitan tradition of the "Sceneggiata" and the soundtracks followed the same pattern, mixing orchestral jazz-funk with Parthenopean folklore. Complete scores were never released and only a few tracks emerged on different compilations. This 1981 album's a mixed bag with some Merola's songs and 6 instrumentals taken from the movies. I edited Merola's songs out (all largely available on cd and digital download) and left only Alfieri's instrumentals.

Incredible Joe Tex cover by Anonima J.M., a studio band based in Milan that released a few albums in the early 70s covering the hits of the day. Featuring cult weirdo rock 'n' roller Riz Samaritano on lead vocals, this is an hilarious version of the funk classic sung in a particularly broken english.
Pubblicato da Little Tony Negri alle 12/07/2013 12:45:00 PM Nessun commento:


Accordionist, vibraphonist, arranger and composer Franco Goldani is one of the many unsung heroes in the italian jazz and pop music scene of the sixties and seventies. This is one of the few library records he made in his career, released in 1970 but most likely recorded a few years earlier, it's a great big-band jazz album recorded with a killer band featuring Enzo Restuccia on drums, Daniele Patucchi on bass, Angelo Baroncini on guitar and Sal Genovese on tenor saxophone.